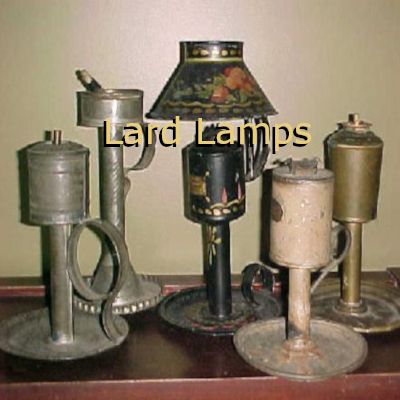 Lard Lamps, for the most part, were in wide use from the 1830’s to the 1850’s. They have a unique design in which the burners are made to heat up and liquify the lard, therefore the oil reservoir is typically no larger than the area in which the burner can reach the fuel.

Many designs were patented and are well known as a good number of the lamps were marked. All of them follow the same basic concept of a heat conducting material (usually copper) that goes down into the lard. They typically have flat wicks although some were curved around the conductor, and it is not uncommon to find lamps using multiple wicks.

Lard Lamps are commonly found made of tin, although examples of glass and pewter were also made.